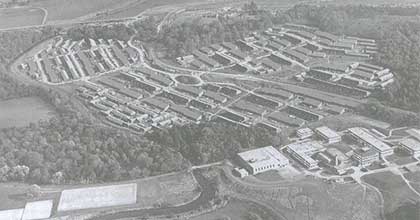 Situated in the eastern part of Runcorn New Town and the Liverpool City Region, Windmill Hill is a housing estate with a population of just 2,400 residents.

Liverpool Housing Trust (LHT) became landlord of the estate in the late eighties when the Commission for New Towns transferred the Runcorn New Town housing stock to the Housing Associations.

In 2006 the Liverpool Housing Trust managed approximately 92% of the housing stock in Windmill Hill; today it is closer to 78%, with 6% of properties being classified as owner occupied. Over the years Windmill Hill has remained a close-knit community, with many residents having friends and family living on the estate.

In the low pale sunlight of the Mersey afternoon, the red brick pavings glint satisfyingly along the length of the streets, which are stopped by a skyline of woodland as the designers intended.

In Windmill Hill, life revolves more around the bus and the bicycle, and walking through a safe green path into the natural landscape that makes up part of the Mersey Forest woodland. Bordered in the north by the winding Bridgewater canal, boys can fish and old men can dream by the canal bank.

THE HISTORY OF RUNCORN NEW TOWN

In 1964, East Runcorn was designated a ‘New Town’ area for the over-crowded residents of Liverpool. During the 15 year period that followed between 1964 and 1979, Runcorn New Town saw around 40,000 new residents arriving from Liverpool. Massive housing projects were built as part of the Liverpool Masterplan, aimed at reducing the overcrowding in Liverpool’s inner city areas. They tranformed a once baron land of fields into new homes by the Runcorn Development Corporation for Liverpool housing associations like Riverside, Plus Dane, CDS Jackson, Liverpool Mutual Homes and the Liverpool Housing Trust. Halton Brook saw the first house built in 1967 and was the first estate to be finished. It was mainly south Liverpool residents like the Ford workers and their families that settled onto the first estate.

By 1980, the total population of Runcorn stood at nearly 66,000. That’s an increase in its population of more than 153% in only 19 years. Runcorn experienced a huge shift in its demographic during this time too, as most of the new arrivals were young couples with children. Over the years the new town area of Runcorn has continued to have a close affinity to Liverpool, through continued family ties and an overwhelming support for the two local Premier League teams of Everton and Liverpool Football Club.

THE HISTORY OF WINDMILL HILL

Built on land that was once part of the Norton Priory Estate (Brookes Estate), Windmill Hill was developed in the mid 1970’s and was one of the last estates built in the New Town of Runcorn. With a total of 981 dwellings constructed by the Corporation, it was created in 2 development phases. The first phase was to the north of the busway, with the second smaller phase built to the south of the busway out along Nortonwood Lane. The 1st house to open on the estate was in March 1978.

“Tucked into a sloping site between Windmill Hill woods and a gentle curve of the Bridgewater Canal, Windmill Hill occupies an attractive site in the north east of Runcorn. There are six types of homes at Windmill Hill – a mixture of bungalows, houses and flats in size suitable for the single person up to a family of seven. The houses and patio bungalows faced in red brick are easily recognised by the single pitched roofs. The larger three bedroom bungalows have a traditional roof and the flats are in three storey group of six, sharing a carpeted stairway. Each dwelling has an individual back garden with flag stones to a rear gate. House fronts face onto a main footway and access roads, with car parking spaces close to the dwellings. Although Windmill Hill with its lovely parkland and views is the most rural of the New Town developments, it is not cut off from Runcorn life. The Runcorn Busway system has buses running on specially designated roads and links Windmill Hill to all the housing areas, industrial estates, Shopping City, railway stations and the Old Town. All the facilities of the New Town are only minutes away on the fast and frequent bus service.”
– Runcorn Development Corporation (1980)

This website uses cookies to improve your experience while you navigate through the website. Out of these, the cookies that are categorized as necessary are stored on your browser as they are essential for the working of basic functionalities of the website. We also use third-party cookies that help us analyze and understand how you use this website. These cookies will be stored in your browser only with your consent. You also have the option to opt-out of these cookies. But opting out of some of these cookies may affect your browsing experience.
Necessary Always Enabled
Necessary cookies are absolutely essential for the website to function properly. These cookies ensure basic functionalities and security features of the website, anonymously.
Functional
Functional cookies help to perform certain functionalities like sharing the content of the website on social media platforms, collect feedbacks, and other third-party features.
Performance
Performance cookies are used to understand and analyze the key performance indexes of the website which helps in delivering a better user experience for the visitors.
Analytics
Analytical cookies are used to understand how visitors interact with the website. These cookies help provide information on metrics the number of visitors, bounce rate, traffic source, etc.
Advertisement
Advertisement cookies are used to provide visitors with relevant ads and marketing campaigns. These cookies track visitors across websites and collect information to provide customized ads.
Others
Other uncategorized cookies are those that are being analyzed and have not been classified into a category as yet.
SAVE & ACCEPT